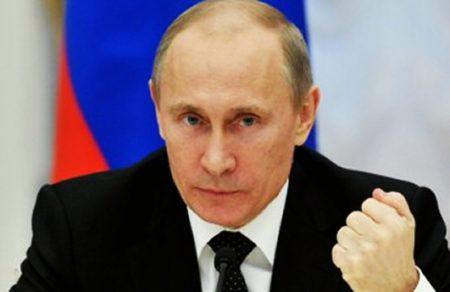 Zakharov’s remarks came during a press briefing on Wednesday, in which she responded to claims by an Israeli online newspaper, Israel Today, that President Vladimir Putin promised Israeli Prime Minister, Benjamin Netanyahu in 2016 that he would block a United Nations Security Council bid demanding Israel to recognize a Palestinian state on the borders of 1967.

The Russian Foreign Ministry’s spokesperson described the claim as ‘ridiculous’ and that such media leaks are simply false and have nothing to do with the truth.

“Unfortunately, such media reports have increasingly become a part of a media display in today’s world. This is absolutely misleading information that creates a great deal of resentment”, she maintained.

In June 15, Israel Today online newspaper reported that in 2016, former US president Barack Obama presented a bill to United Nations’ Security Council, demanding Israel to recognize a Palestinian state on the 1967 border.

The newspaper noted that by then, Israeli Prime Minister, Benjamin Netanyahu, asked President Vladimir Putin to veto such a bid and that the latter agreed, prompting Obama to withdraw his proposal.

Zakharova further commented by saying, “The Israeli newspaper which reported this seems to be unaware of the reality in the Middle East.”

She also pointed out that back in 1988, Russia recognized the Palestinian declaration of a Palestinian state, including East Jerusalem as its capital.

The Russian announcement comes as Israel is expected to annex large swaths of the West Bank, by early next month. The Israeli announcement for annexation has been met with rejection by Palestinians, European Union, United Nations, Arab countries and the Russian Federation.

By annexing those parts of the West Bank, a long-envisioned two-state solution will be grossly undermined, as Palestinians could be in control of only some disconnected Palestinian areas that could never make up a state.

The United States announced in January of this year its so-called ‘deal of the century’, in which the US claims that East Jerusalem as the capital of the state of Israel, despite international recognition to the contrary.

Notably, the 1967 borders include the entire West Bank and the Gaza Strip, which Israel occupied, along with the Syrian Golan Heights and the Egyptian Sinai Peninsula, in June of 1967.

At that time, the United Nations Security Council passed its binding resolution 242 that demanded Israel to withdraw from the Palestinian land it occupied in 1967. Israel has never withdrawn, but has instead kept the Palestinian population of the West Bank and Gaza under martial law since then.

At the same time, Israel has steadily encroached on and annexed Palestinian land for the use of its own private citizens by establishing colonial settlements on the stolen land, in violation of international law.