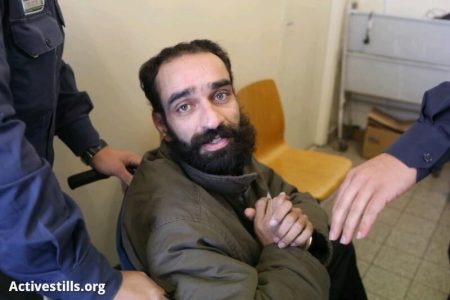 The media committee of the prisoners’ strike said, on Saturday evening, that detainee Samer Al-Isawiwas taken from Ayalon to the Ramla prison clinic after a deterioration  his health.

Samer served 10 years in the Israeli prison system and became an internationally recognized icon for the prioners’ movement, after spending 9 months on hunger strike in 2013.

Some 1,800 detainees are still struggling with the occupation’s measures through the “Freedom and Dignity Hunger Strike”, which has been continuing, now, for the 35th day in a row, according to Al Ray.

Prison administration transferred a number of the strikers in “Ashkelon”  prison, to “Barzlai”  hospital, after a number of them stopped drinking water.