Shirin and Samer Isawi Back Allan in Hunger Strike 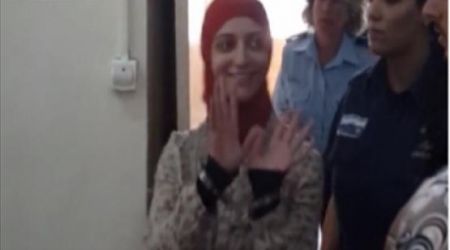 Detainee Shirin Isawihas joined her brother and fellow inmate in an open-ended hunger strike, in solidarity with hunger-striking prisoner Muhammad Allan, who recently awoke from a coma induced by failing health.Palestinian administrative detainee and prominent attorney Shirin Issawi, who joined her brother Samer Issawi in the hunger strike protest on Monday, was detained by Israeli forces in a raid last March, said Amjad Abu Asab, who heads the Palestinian Authority Committee for Prisoners’ Affairs in al-Quds (Jerusalem).

Press TV/Al Ray reports that Israeli courts have since continued to extend Shireen’s illegal detention without trial or charge, under a controversial policy referred to as administrative detention.

The development comes as Allan’s lawyers have rejected an offer by the Tel Aviv regime to release him on the condition that he abandons his home and moves abroad.

The young inmate, who woke from a coma on Tuesday, still faces an imminent risk of death. He went on a hunger strike more than two months ago to protest his prolonged detention without charges or trial.
Allan has been connected to ventilators to help his breathing, while being administered fluids and sodium intravenously.

His case has prompted concerns that the Israeli regime will go ahead with a new controversial bill passed in the Knesset last month allowing doctors to force-feed hunger-striking prisoners.

Meanwhile, Shireen’s brother was previously released from an Israeli prison in December of 2013, as part of a deal in which he agreed to end his 266-day hunger strike to protest his indefinite captivity under the administrative detention policy.

Samer’s hunger strike was among the longest recorded in history. The protest effort brought him close to death and gained international attention.

However, Samer was rearrested on previous charges in July 2014.

According to Palestinian prisoners’ rights group Addameer, over 5,700 Palestinian political prisoners remain captive in Israeli jails in addition to 401 administrative detainees that are being held without charge or trial.