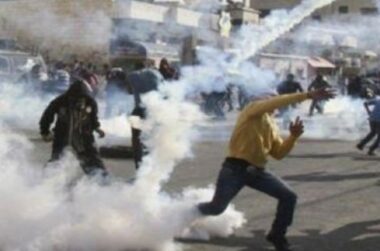 Israeli soldiers and colonialist settlers continued, Saturday, their escalating violations against the Palestinian people in several parts of the occupied West Bank, including the occupied capital, Jerusalem.

In Tubas, in northeastern West Bank, the soldiers attacked dozens of Palestinians nonviolently protesting the illegal annexation of their lands, near Tayasir military roadblock, east of the city.

The soldiers stopped a Palestinian bus, filled with residents who participated in the nonviolent procession, before detaining and interrogating them at Tayasir roadblock for several hours.

They added that the soldiers fired dozens of gas bombs at the protesters, causing many injuries, in addition to spraying them with wastewater mixed with chemicals.

In addition, the soldiers abducted a young man, identified as Bilal Kamil, from Qabatia, south of the northern West Bank city of Jenin, after stopping him at a military roadblock near Misilyah village.

In Bethlehem, south of occupied Jerusalem in the West Bank, Israeli colonizers invaded a Palestinian orchard, owned by Yousef Abed Hajar, and sprayed his olive saplings with toxic chemicals.

The attack took place in the Wad Abu Bkeir area, near the illegal Daniel and Eleazar colonies which were built on stolen Palestinian lands, and led to the destruction of more than 140 olive saplings.

In addition, Israeli soldiers set up an iron gate at the road leading to the al-Fredis Mountain, east of Bethlehem, and installed cellphone and telecommunications towers.

Hasan Breijiyya, the head of the Bethlehem office of the “Wall & Colonization Resistance Commission,” stated that the gate will prevent the Palestinians from entering their lands, and added that Israel has imposed severe restrictions in al-Fredis and Jib ath-Theeb areas.