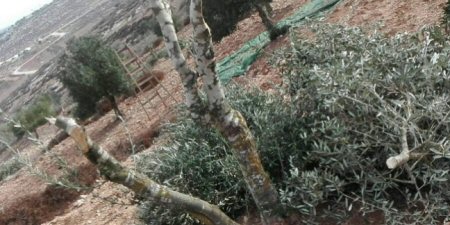 Israeli settlers, on Sunday morning, cut and destroyed about 40 olive trees in the town of Turmusaya, north of Ramallah, in the occupied West Bank.

According to local PNN sources, farmers who went out on their lands, today, found out that over 40 olive trees in their own lands, near the settlement outpost ŌĆ£Adi AadŌĆØ, have been cut down and destroyed.

This is the second consecutive attack on olive trees in the area during this week. This month is the season for ŌĆ£olive pickingŌĆØ in Palestine, known for its quality product of olives and olive oil.