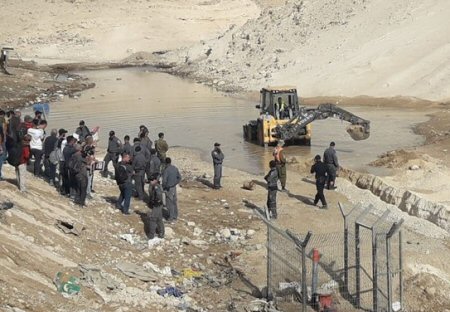 Israeli settlers stormed the Bedouin village of Khan al-Ahmar, east of Jerusalem, on Monday, and flooded the area with wastewater for a second time.

Locals said that Israeli settlers from the nearby illegal Israeli settlement of Kfar Adummim, stormed the village and flooded Khan al-Ahmar with wastewater, causing serious environmental and health hazard for residents.

Ma’an sources added that the wastewater from the Kfar Adummim settlement flooded large areas of the village, as Israeli settlers attempted to assist the Israeli government in forcing the residents to leave the area.

This is not the first time Israeli settlers flooded the village with wastewater, causing serious damage to land and property.

Khan al-Ahmar is in danger of being demolished by Israeli forces at any moment, which would displace 181 people, half of whom are children.

Critics and human rights organizations argue that the demolition is part of an Israeli plan to expand the nearby illegal Israeli settlement of Kfar Adummim, and to create a region of contiguous Israeli control from Jerusalem almost to the Dead Sea, which would make a contiguous Palestinian state impossible.

Israel has been constantly trying to uproot Bedouin communities from the area to east of Jerusalem, to allow settlement expansion in the area, which would later turn the entire eastern part of the West Bank into a settlement zone.

Although international humanitarian law prohibits the demolition of the village and illegal confiscation of private property, Israeli forces continue their planned expansion by forcing evictions and violating basic human rights of the people.

Israel is attempting to displace the residents of Khan al-Ahmar from the area, in order to complete their illegal settlement project labeled as E1.

Israeli authorities plan to build thousands of homes for Jewish-only settlements in E1, which would effectively divide the West Bank and make the creation of a contiguous Palestinian state — as envisaged by the two-state solution to the Palestinian-Israeli conflict — almost impossible.