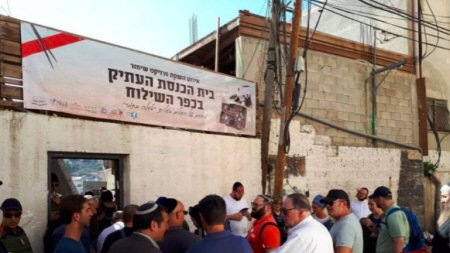 Two Palestinians were arrested prior to the event and dozens of others were forcibly cleared from the streets by fully armed Israeli police.

The Israeli government on August 1, 2018 held an event marking the opening of a settler-run “Jewish heritage center” in the Batn al-Hawa area of Silwan in East Jerusalem. Silwan is a densely populated Palestinian neighborhood adjacent to al-Aqsa Mosque that already suffers from multiple, expanding Israeli settlements and settler-run tourist sites.

Prior to the inauguration ceremony, fully armed Israeli police descended upon the neighborhood. Security forces arrested and interrogated Nuheir Rajabi, head of the Batn al-Hawa Council, and Jawad Siam, director of the Wadi Hilweh Information Center. Police also cleared the roads of Palestinians and Palestinian journalists, ordering them to leave the area, and blocked many roads, which created massive traffic jams.

“[A Shin Bet officer] said he saw on Facebook that we’re planning a demonstration and said he doesn’t want to have to arrest me, that it wouldn’t be in my interest,” Rajabi told Israeli newspaper Haaretz. “I told him that we want to tell [Israeli minister of culture] Miri Regev that there are people here, these are their homes, and I’m not breaking the law.”

Ateret Cohanim, a settler organization that seeks to impose a Jewish demographic majority in Jerusalem via religious schooling and settlement expansion, owns and manages the new center. They confiscated the building from the Abu Nab family, which had lived there since 1948, when they were expelled from West Jerusalem.

Israel’s High Court granted Ateret Cohanim ownership of the property based on the claim that the group represents the Jewish Yemenite immigrants who owned the property in the beginning of the 19th century and used it as a synagogue. Ateret Cohanim also leveraged The 1970 Legal and Administrative Matters Law, which empowers Jews to reclaim property in East Jerusalem lost before 1948 even if they have already been compensated by the Israeli government for that loss. The Absentee Property Law of 1950 bars Palestinians from filing similar claims.

The Israeli Ministry of Culture has pledged to fund the transformation of the Abu Nab house with 3 million shekels (about $800,000). The Jerusalem Affairs Ministry will supply another 1.5 million shekel (about $400,000).

At the inaugural event, Regev said: “Look around. We are surrounded by Jewish heritage. The archaeologists won’t find a single Palestinian coin here! We have come home.” “The State of Israel is the nation-state of the Jewish people alone. Only the Jewish people are entitled to national rights between the river and the sea,” she added.

Daniel Luria, the executive director of Ateret Cohanim, called the project “pure Zionism” and part of “the unfolding redemption process.” “The government has recognized this place as a heritage site and that’s sovereignty and it’s beautiful and welcome.”

Israeli Jerusalem affairs minister Ze’ev Elkin and former US presidential candidate and Governor of Arkansas Mike Huckabee also attended the event. Israeli media reports that Huckabee had just arrived to Jerusalem after laying a cornerstone for another settlement expansion project in the West Bank.

The European Union condemned the settler tourist center in Silwan, emphasizing that “around 180 Palestinian households in East Jerusalem, out of which approximately 100 in Batn al-Hawa alone, face the risk of eviction from their homes, directly facilitating further settlement growth in the city, as in this instance.”

Promoting tourism is one method the Israeli government uses to carry out these settlement plans, especially in Jerusalem. Earlier this year, Regev announced that the Israeli government would funnel 17 million dollars to the settlement archeology site in Silwan known as the City of David. The center sits on a confiscated Palestinian home and orchard. Although the City of David is part of the Israel Nature and Parks Authority, it is administered by settler organization Elad, which – like Ateret Cohanim – seizes Palestinian property in Jerusalem to establish new settlements.