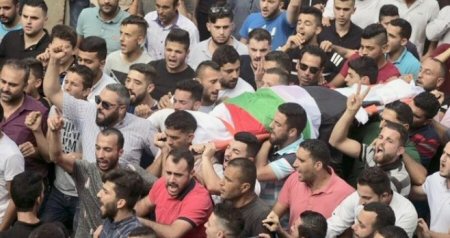 Aisha Muhammad Talal al-Rabi, 47, a mother of eight children, from the Bidya village near Salfit in the northern occupied West Bank, was killed and her husband was injured, after Israeli settlers hurled rocks at their vehicle near the Zaatara checkpoint, in Nablus, \northern West Bank.

Israeli authorities arrested the five Israeli settlers on December 30th. However, they did not confirm the arrests until earlier this week, due to a gag order which forbids the public disclosure of information or comment on a particular matter.

According to a statement by Shin Bet, the remand of the fifth Israeli settler has been extended for another six days.

Shin Bet added that the five, who are students at the Pri Haaretz religious seminary in the Rechelim settlement, in the northern occupied West Bank distirct of Nablus, were arrested “after intelligence efforts connecting them to the death of al-Rabi.”

“The four were released after it was decided that the investigation could continue while they were under house arrest and other limiting conditions,” the Shin Bet noted.

The Palestinian President Mahmoud Abbas slammed the killing of Aisha by Israeli settlers and called it “a heinous crime that cannot go unpunished.”

However, the Palestinian government has no jurisdiction over Israelis in the West Bank, and violent acts carried out by Israeli settlers often occur in the presence of Israeli military forces who rarely act to protect Palestinian residents.