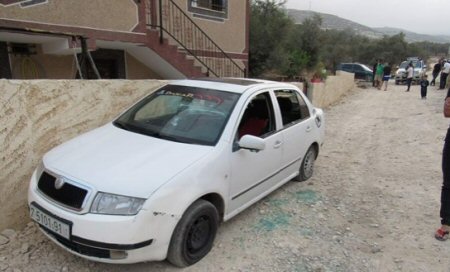 Locals said, according to Ma’an, that Israeli settlers raided the village overnight and punctured the tires of several Palestinian vehicles.

On Sunday, Israeli Civil Administration delivered a notice regarding the uprooting of about 70 Palestinian-owned olive trees in the Jordan Valley area. On Saturday, Israeli settlers had uprooted and damaged 20 olive trees in a Nablus-area village.

Earlier this year, the Shin Bet, Israel’s internal intelligence agency, reported a spike in Israeli hate crimes against Palestinians in 2018.
According to the April report, there were 13 attacks in the first four months of this year – more than in the whole of 2017, when the agency recorded only eight attacks — though Palestinians report the number to be much higher.

According to the United Nations Office for the Coordination of Humanitarian Affairs (OCHA), there were a total of 107 reported settler attacks against Palestinians and their properties in the West Bank and occupied East Jerusalem, in 2016.

Known as “price tag” attacks, extremist Israeli settlers use violent acts of retribution on Palestinians and their property to demonstrate their opposition to Israeli restrictions on settlements and their outposts in the occupied West Bank.