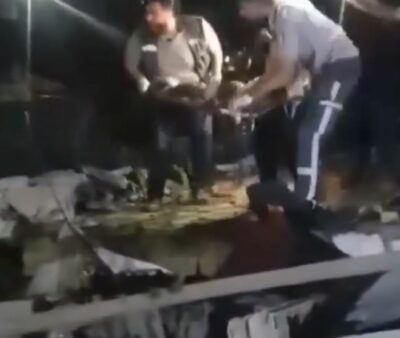 The Israeli army fired, on Saturday at dawn, several missiles at a Palestinian home in the Shati’ refugee camp, west of Gaza city, killing eight family members, including a mother and a child, and injuring more than twenty.

The Palestinian News & Info Agency (WAFA) said the Israeli Air Force fired several missiles at a three-story home, owned by the Abu Hatab family, killing eight members of the family and wounding twenty others. One child was rescued from under the rubble.

The Palestinians are still searching under the rubble trying to find more victims of the Israeli bombardment.

It is worth mentioning that the soldiers also fired missiles at a home in Sahaba Street, in the center of Gaza city.

While Israel claims it usually fires “smaller warning missiles at the targeted homes,” it largely does not do so, which is the case with the Abu Hatab family who was sleeping when the missiles struck their home.

The so-called “warning smaller missiles” also cause damage and are followed by the bigger missiles within just minutes, which does not give the families enough time to wake up, gather everybody, and run out to a safe distance.

The targeting of homes and civilian structures are acts of war crimes, violating International Law and all related resolutions and treaties.

Also at dawn, the army fired five missiles at a mosque in Beit Lahia, in northern Gaza, completely leveling it, and causing damage to many surrounding homes and buildings.

The WAFA Palestinian News Agency has reported that the army also fired missiles at two homes in the same area, killing three Palestinians according to initial reports.