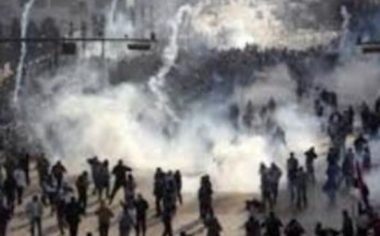 Israeli soldiers invaded, on Friday at dawn, Beit Ummar town, north of the southern West Bank city of Hebron, and fired many gas bombs during ensuing clashes, causing many Palestinians to suffer the effects of teargas inhalation. The soldiers also broke into many homes and searched them.

Mohammad Awad, a media activist in Beit Ummar, said the soldiers invaded the center of the town, and attempted to break the locks of a local recording studio, owned by Ayesh Ahmad Awad.

The soldiers also invaded two homes, owned by Myassar Hasan al-‘Allami and Mohammad Issa Awad, and occupied their rooftops, before firing many gas bombs and concussion grenades on Palestinian protesters.

Clashes also took place near the Big Mosque of the town, and the soldiers also fired many gas bombs and concussion grenades.

The local Red Crescent said it provided treatment to many Palestinians who suffered the effects of teargas inhalation.

In related news, the soldiers abducted two Palestinians in Ramallah and Jenin, in addition to wounding one Palestinian, and causing three medics to suffer the effects of teargas inhalation in Qalqilia.