Shaked: ‘No Chance for Palestinian State’ 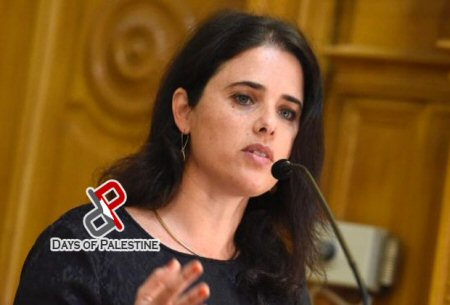 Israeli Justice Minister Ayelet Shaked said, on Monday, that “there is no chance for a Palestinian state.”

Shaked was interviewed by Israeli media, during which she forwarded her message to Israeli Prime Minister Benjamin Netanyahu.

The extremist minister also asked Netanyahu to pass this message to the US President Donald Trump, during his scheduled visit to the region on May 22.

According to Days of Palestine, she was quoted by Ynet as saying: “The message that Netanyahu has to convey to Trump is that there is no chance for a Palestinian state, at the moment.”

She stressed that “the gaps between Israel and the Palestinians are currently too great for a political agreement to be reached; there is not going to be a Palestinian state within the 1967 borders.”

The woman, who has been known for her scathing remarks regarding Palestinians, continued: “There is an opportunity when a president such as Trump, who is willing to take courageous steps, to think outside the box and advance a large economic agreement with the more moderate Arab countries, and with the Palestinians.

“We can promote common industrial infrastructures and areas that all citizens, here in the Middle East, will enjoy.”

Instead of the Palestinian state, she suggested: “You can give, as they say, an ‘economic peace on steroids to the Palestinians, build industrial zones there, improve their quality of life. Let’s do this.”