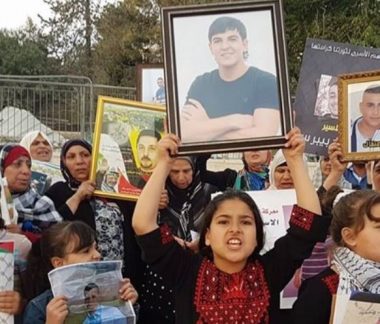 Israeli soldiers and security officers attacked, Wednesday, nonviolent Palestinian protesters, and journalists, in the courtyard if the International Red Cross center in occupied East Jerusalem, injured one Palestinian, and abducted three others.

The head of the Palestinian Prisoners’ Society (PPS) in Jerusalem, Nasser Qous, said the soldiers invaded the yard of the Red Cross and abducted Ahmad Safadi, Mohammad Daqqaq, and Kayed Rajabi.

The soldiers also assaulted a young man, identified as Areen Za’anin, causing various cuts and bruises, before Palestinian medics moved him to a hospital for treatment.

Qous added that the soldiers, and several security officers, attack the nonviolent protesters, including elders, in the courtyard of the Red Cross.

Qous also stated that Israel wants to silence all voices expressed in solidarity with the hunger striking Palestinian detainees in Israeli prison.

On his part, Amjad Abu ‘Assab, who heads the Jerusalem committee for prisoners’ families, said the soldiers videotaped the protesters and surrounded the Red Cross before assaulting the Palestinians, just as they were leaving it.

Abu ‘Assab added that the Israeli escalation and violations will never be able to stop the solidarity activities and protests in support of the detainees, who are asking for basic rights, guaranteed by International Law, the Fourth Geneva Convention, and all related treaties.