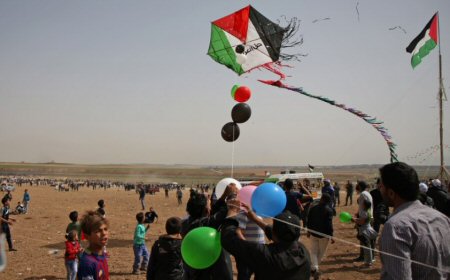 Israeli Justice Minister Ayelet Shaked has warned that her government may launch a new war on Gaza Strip because Palestinians continue to fly “incendiary kites” over Israeli farms.

Shaked said that Israel, which developed the iron dome anti-missile system, is able to develop a new system to take down the Palestinian kites. She claimed that the Palestinian children who fly kites are “terrorists” involved in “terrorism.”

The minister echoed similar remarks made by the Israel’s Public Security Minister, Gilad Erdan, who was reported by Haaretz, on Thursday, as saying that Israel might be “forced” to launch a “large-scale military operation” in the Gaza Strip.

“I do not want to launch an operation, but there is a good chance that we will have no other option but to go in so that we can create durable deterrence,” he told Israeli Army Radio.

Erdan added, according to Days of Palestine, that those who launch ‘burning kites’ from Gaza should be shot, regardless of their age. “Age does not matter,” he insisted. “They are terrorists and the danger they create must be prevented.”

The Palestinians in the Gaza Strip continue to point out that their protests are entirely legitimate under international law.

To call them terrorists, they insist, is not only inaccurate, but also an attempt by the Israelis and their supporters to deceive the world about the nature of the conflict in occupied Palestine.

It is worth mentioning that Israel has started to launch drone attacks against Palestinian children who fly kites along the eastern borders of the Gaza Strip.