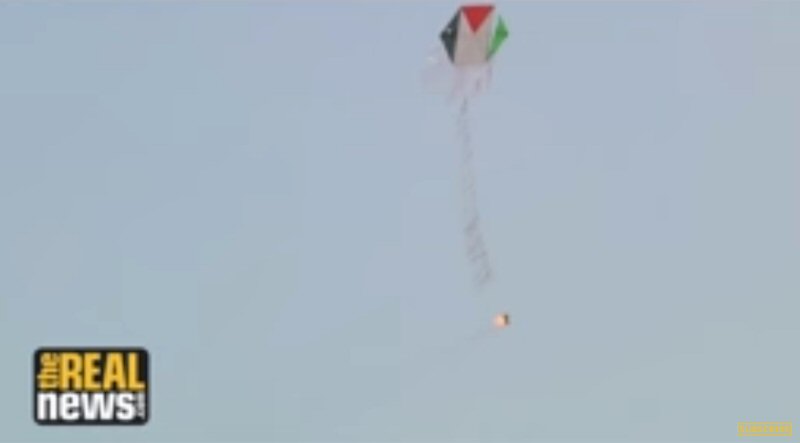 As Israel mows down protesters in Gaza with brutal military technology, Palestinians respond creatively, with kites and balloons. Shir Hever discusses the hidden rift within the Israeli military.

The Great March of Return has continued in Gaza now for 11 weeks. Palestinians are holding regular demonstrations along the Gaza fence, protesting the crippling Israeli siege and the illegal denial of their basic rights under international law. The current death toll stands at 129 unarmed protesters, who were gunned down by Israeli forces since March 30, with many thousands more wounded by live ammunition. The Israeli Air Force pounded the Gaza Strip over the weekend, but no casualties were reported. Meanwhile, the thousands of injured protesters are more than the health facilities in Gaza can handle. Medical staff have repeatedly warned that protesters are arriving at the hospitals with severe wounds that are a sign that the Israeli army is likely using munitions that are prohibited under the Geneva Convention. As Israel continues to deny entry to patients in need of medical attention, many of the protesters have had their limbs amputated.

Palestinians in Gaza have adopted many creative ways of responding to the overwhelmingly violent weaponry wielded by Israeli forces, flying kites and balloons into Israeli territory, sometimes carrying Molotov cocktails. This has taken the Israeli military by surprise. As the Israeli Air Force started sending drones to hunt kites and balloons in the sky, Palestinians have developed a kite fitted with a fishing net which they call the New Model F-16, to try to catch Israeli drones in the air. Ahmed Abu Attaia offers another example of Palestinian creative resistance, as he collects tear gas canisters and turns them into decorations.

AHMED ABU ATTAIA: I am doing this so we always remember our homeland and the oppression of the occupation. Because the occupation is not firing flowers at us. It is firing death at us. As the saying goes, they plant death for us, and we reap life. We are people who aim for life. We have a message.

Well, joining us to discuss this issue is Shir Hever. Shir is the Real News correspondent in Heidelberg, Germany. He has a Ph.D. in Political Science from the Free University in Berlin, and his most recent book is “The Privatization of Israeli Security,” which was published by Pluto Press in 2017. Thanks for joining us, Shir.

SHIR HEVER:Thanks for having me, Ben.

BEN NORTON:So what do we actually know about the kind of ammunition which Israeli snipers are using against Palestinians in Gaza? There are reports that the IDF is actually using expanding bullets, which are known as dumdum bullets.

SHIR HEVER:Yeah. Well, unfortunately we don’t know the full facts. And the medical staff in Gaza, what they lack in order to conduct a proper investigation of the ammunition that is used is the cases of the bullets. And those stay, of course, on the Israeli side when the bullets are fired.

But there is a very interesting report that was written by Avihai Stoller, who is a former Israeli soldier, a member of the organization Breaking the Silence. And he analyzed a lot of pictures showing Israeli soldiers using various sniper weapon, sniper rifles, and firing at Palestinians, trying to identify what kind of ammunition these weapons can use. And he says, well, one possibility is that the Israeli army are using dumdum bullets, or hollow-point bullets, which expand in the wound, and they are indeed prohibited by law. But the problem with this analysis is that it doesn’t make a lot of sense that Israeli soldiers would be equipped with those kinds of bullets for this sort of mission, to fire on unarmed protesters approaching the fence. It wouldn’t serve any tactical or strategic purpose for the Israeli military.

But he offers another interpretation, and the other interpretation, that I think is very interesting and also very convincing, is that in fact these sniper rifles, which are produced, made by American companies, by Remington and the Knights ammunition company, they are sniper rifles which are designed to use at a certain range. And what the Israeli soldiers are doing, they’re using the rifles at very close range, with a few tens of meters. And at those ranges even regular bullets can cause these expanding wounds which are very, very damaging to living tissues, and can cause irreparable damage to limbs. And that’s why so many Palestinians so seriously injured.

And I think then this, of course, raises the question, why are Israeli soldiers using sniper rifles at such short range when we know that they have also alternatives like Ruger rifles, which are specifically designed to disperse demonstrations and to be used in noncombat situations?

BEN NORTON:Yeah. You raised a few important points there. One, we have to stress these are U.S. made weapons, and the U.S. gives 3.8 billion dollars every year in military assistance to Israel. And also, you did say that there might be no military purpose. But what if the political purpose is simply to wound and maim as many Palestinians as possible, to discourage them from protesting?

SHIR HEVER:I think there is absolutely no shortage of ability for the Israeli military to cause pain, suffering, and death to Palestinians. You know, the Hamas party used to have on their charter, they changed the text of it, and it called to wipe out Israel. And there was also an Israeli Minister, Yuval Steinitz, the minister of energy, who just said two weeks ago that Israel should consider eliminating Gaza.

His statement is much more scary than the Hamas statement, because his side actually has the weapons to do it. There is no problem for the Israeli military to kill and maim as many Palestinians as they want, in terms of their physical ability to do so. And, but why would they then go out and do it using this kind of prohibited, prohibited ammunition, the dumdum rounds and so on, when they could, for example, use other kinds of ammunition that we know they possess, such as scatter bombs and phosphorous bombs, which they have used before. So I think there is, there is an issue here that needs to be explained.

And, and also I want to say something about the point that these are American weapons. Of course, the United States bears a lot of responsibility for arming the occupying power with weapons that are used in the regular violation of human rights, and in war crimes. But I’m also interested in looking at that through the angle of the Israeli arms industry. When we look at the previous attacks on Gaza, starting from 2006, 2008, 2012, 2014, the Israeli military has specifically showcased their use of Israeli weapons in these attacks because they want to sell them. Because they turn the Gaza Strip into a laboratory for Israeli weaponry. And so after every attack in Gaza, then they show videos of how they used Israeli weapons. And then they, they use those videos to try to convince customers to buy the weapons. This time we don’t see that, because they’re using American weapons. They’re using a Remington and Knights armament company sniper rifles. Also a few Israeli sniper rifles. But those are not really showcased so much. And they’re not using the Israeli, shall I say, flagship weapons, like the drones, which are their main exports.

And this, it shows that that the Israeli strategy of using the Gaza Strip as a laboratory is collapsing. And we have to understand what kind of strategy have Palestinians developed that is preventing the Israeli government from, from benefiting from the siege of Gaza.

BEN NORTON:We’re going to take our pause in our conversation here. We’re joined by Shir Hever to discuss the militarization of Israel-Palestine, and specifically the arms race going on. Join us in Part 2.