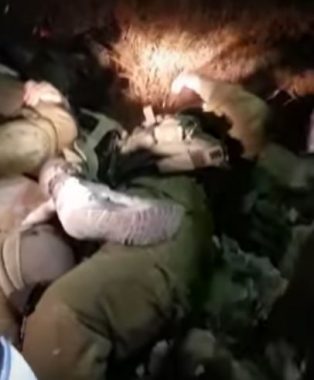 Four Israeli soldiers were injured Saturday night, after being hit by a Palestinian car near Husan town, west of Bethlehem in the occupied West Bank.

Update: Jun 24, 2018 @ 16:14
The Palestinian driver turned himself in to the army, and was taken by the soldiers to an interrogation facility.

He informed his family about the accident, and told them that he did not intentionally ram the soldiers.

He was advised to turn himself in to the army to avoid getting killed by the soldiers, and to avoid having the army frequently invading his family’s home and destroying it in an attempt to abduct him.

Israeli sources said four soldiers; three female soldiers and one male, were injured in the incident.

Although the Israeli military claimed that the soldiers were hit deliberately in what they called a “suspected car-ramming attack”, there was no evidence that the collision was anything beyond a car accident.

A cell phone video after the incident shows Palestinian civilians approaching the injured soldiers to try to help them.

A female soldier is seen in the video calling on her radio for an ambulance, and the Palestinian civilians nearby reiterate that an ambulance is needed, and a person can be heard crying after seeing the injured soldiers.

The three soldiers suffered mild injuries, and were rushed by Israeli medics to the Shaare Zedek Medical Center, in occupied Jerusalem.

Israeli daily Haaretz said the military initiated a search campaign to arrest the driver, who fled the scene, leaving his vehicle behind.

The driver, from Deheishe refugee camp, in Bethlehem, contacted the Palestinian police in Bethlehem, and told them that what happened was merely an accident, and that he fled the scene because he feared the soldiers would kill him, similar to what happened in previous incidents when the military claimed that car accidents were deliberate attacks, and soldiers killed the drivers immediately on the scene.

In 2015, for instance, an elderly Palestinian woman, Tharwat Salman Sha’rawi, was shot and killed by Israeli soldiers after a car accident.

And in 2016, another Palestinian woman, Amani Sabateen, a mother of five, was shot and killed after her vehicle accidentally struck an Israeli soldier who was on the street in her town, injuring him.

Haaretz quoted a source in Deheishe refugee camp stating that the brother of the driver in Saturday’s incident was recently abducted by the soldiers. This led the paper to claim that the incident “could have been an act of revenge.” The Israeli army claimed it was investigating the incident.

It is worth mentioning that the soldiers were invading Husan when the incident took place and were deployed on foot in various streets.