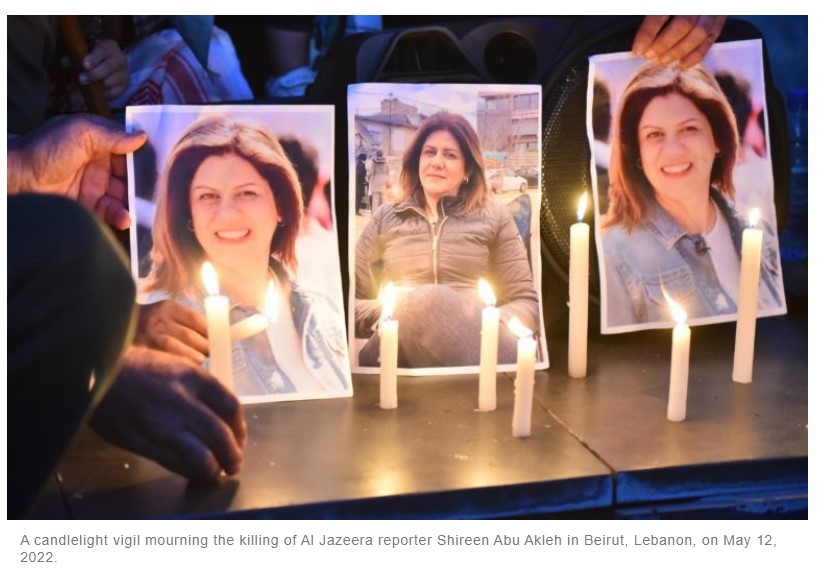 A comprehensive report on Shireen Abu Akleh’s murder, and why it played out the way it did. Her story, like that of the Palestinian people, is one of courage in the face of injustice. In mourning her murder, let us acknowledge the facts of Palestinian life – and death.by Kathryn Shihadah – IsraelPalesineNews

For a few days last week, the name of Shireen Abu Akleh was in the headlines of virtually every news outlet on the planet. Her death and the debacle of her funeral procession were front-page news.

The details of her story, however, could not be covered in a one-minute report or a few column inches on a news website. In fact, Shireen’s story is in many ways the story of 7 million Palestinians living under the Israeli regime.

Israel has killed over 10,000 Palestinians since 2000 (start of the Second Intifada), but mainstream media ignores these deaths for the most part. Shireen Abu Akleh’s name made the cut, perhaps because she was an American citizen and a well-known journalist.

Shireen did not die while reporting in an active conflict zone. Rather, she and other journalists, dressed in helmets and bulletproof vests marked Press, were standing what should have been a safe distance from the site of an Israeli raid.

Eyewitnesses described the scene as “dead quiet” on Wednesday, May 11 just before several shots rang out, and Shireen was found lying face down, shot in the head.

Within hours of Shireen’s death, as her loved ones gathered to mourn, Israeli police invaded the gathering, demanding that the Palestinian flags outside the house be removed. Mourners shouted at them till they finally left.

(The Palestinian flag makes Israeli soldiers and police crazy. Examples: they chased and beat a child for having a flag on his bicycle, and harassed a young woman whose head covering included stripes in the colors of the Palestinian flag. More on the flag below.)

Israeli PM Naftali Bennett announced almost immediately, “According to the data we currently have, there is a considerable chance that armed Palestinians, who fired wildly, are what led to the unfortunate death of the journalist.” Israel’s foreign minister, defense minister, other ministers, and IDF spokesperson repeated this statement.

The Israeli military explained further that there had been a skirmish in which Palestinians were shooting in an “uncontrolled manner” and Israeli forces “returned the fire as accurately, carefully, and responsibly as possible.”

Somehow, Shireen Abu Akleh was “killed in the exchange.”

The officer in charge of the raid asserted, “I am sorry for every innocent person who is hurt in the course of IDF operations,” he said. “We do our best to avoid it.”

(Israeli leaders are always quick to declare the innocence and proficiency of their soldiers, and the desire to protect Palestinian civilians – while painting Palestinians as less civilized.

When put in a corner, they may admit to an individual soldier’s momentary lapse of judgment, as here, or find a minor offense to punish, as here. But at no point are Israel’s oppressive policies questioned.

Israel has also repeatedly lied about its officers’ actions, only to be caught later. Examples here, here, and here.)

Next, Israel offered to do a joint investigation of the incident with the Palestinians. The Palestinian Authority, unwilling to allow the alleged perpetrator of the murder to participate in the case, turned this offer down. An Israeli official stated, “Without a serious investigation, we will not reach the truth.”

(The Israeli government is notorious for finding itself innocent whenever it self-investigates – video here – occasionally slapping a low-level soldier with a minor charge. Israel also refuses to allow international investigators access to check on human rights of Palestinians.

When a group reports that the Israeli military is guilty of a crime, Israel invariably calls both the group and the report “antisemitic,” and/or claims they are trying to “delegitimize Israel.” Examples here, here, and here.)

By the following day, Israel had a new take: an Israeli official acknowledged that perhaps an Israeli bullet had deflected off the ground, or off a wall – and hit Shireen right under her safety helmet.

Al Jazeera described Israel’s spinning of the incident as a “PR blitz to manipulate mainstream media coverage of the shooting.” By stating immediately after the killing that they had “data” indicating Palestinians were to blame, global headlines felt obligated to give Israel the benefit of the doubt – even though the theory was absurd and disproved almost immediately. Further,

According to an Israeli official, this PR blitz has already influenced leading news organizations, including the Associated Press, Sky News, the BBC, and AFP. The official said that these agencies – which initially reported that Abu Akleh had been killed by Israeli fire – were now reporting that the circumstances of her death are under investigation.

(Israel has for decades had remarkable control over mainstream media, as has been documented numerous times, including by If Americans Knew – see this, this, and this for example).

Al Jazeera journalist and friend of Shireen, Guevara Al-Budairi reported that while she and others were in the morgue, dressing Shireen for the funeral, they  “could not find any piece of bone [skull] in the back of her head. The skull was completely shattered. That is proof that she was killed by the Israeli army because no one else has this modern weapon.” (This has not been confirmed anywhere else.)

Israeli officials blocked West Bank Palestinians from attending the funeral, banned the waving of Palestinian flags, and forbade the chanting of nationalist slogans. The coffin was to be transported from St. Joseph French Hospital to Mount Zion Cemetery by car, not on foot.

Palestinians, determined to grieve their Palestinian hero as they chose, defied Israel’s attempt at micromanagement.

When pallbearers came out of the hospital with Shireen’s coffin, an estimated 150 Israeli riot police rushed in and began attacking the mourners, shoving and beating them, grabbing flags from their hands, and shooting tear gas and stun grenades into the crowd. The pallbearers nearly dropped the coffin (video).

(Excessive force is the norm for Israeli police and soldiers. See this, this, and this for example. Israel also “battle-tests” new kinds of weaponry on Palestinians, then sells its products to repressive regimes worldwide.)

“But we can explain”

In addition to the massive police presence, Israeli drones overhead captured video of the event. One recorded “two young men throwing what appears to be a water bottle at the police officers.”

The police published the clip, explaining that the mourners were “disrupting public order.”

Israeli brutality toward the mourners was so severe that Shireen’s family relented and had her coffin (draped in a Palestinian flag) placed in a hearse – but by this point, Israeli violence had been live-streamed around the world.

As the hearse made its way toward the cemetery, Israeli police grabbed Palestinian flags off the vehicle and even broke its windows in order to remove the flag from Shireen’s coffin.

Eventually, Shireen and her loved ones made it to the Catholic cemetery, and she was laid to rest.

As one of her fellow journalists described the moment,

We finally arrived at the small monastery in the city and the church bells began ringing for Shireen, who is from a Christian family from Bethlehem.

Around Shireen’s corpse, we all stood as Muslims and Christians, listening to the priest’s prayer in silence.

When I looked around I saw multiple cameras filming. Behind each one was a Palestinian journalist sobbing, knowing that Shireen will never be on the other end of those lenses again.

(Israel itself, and mainstream media, fail to ask the obvious questions: Why were Israeli police there to begin with? How would the funeral procession have played out if no Israeli police had been present? What actual harm were the Palestinian flags causing, that they had to be ripped out of mourners’ hands, and that the hearse windows had to be broken?)

Israel wreaked havoc in East Jerusalem that day – but that’s not all. Israel is adept at multitasking.

On May 13 – the same day as Shireen’s funeral – something significant was also happening in Hebron.

Hebron is a Palestinian city in the occupied Palestinian territories, but some Israeli Jews want to get rid of all the 200,000 “Arabs” and turn it into a Jewish city.

In the heart of Hebron, about 700 Israeli settlers have taken up residence; thousands of Israeli soldiers and police guard them. They make life nearly unbearable for their Palestinian neighbors.

On Friday, Hebroni peace activist Issa Amro filmed Israeli settlers carrying suitcases, mattresses, and other belongings into an uninhabited three-story home. The home belongs to a local Palestinian, and was under renovation.

Now it is the residence of illegal Israeli squatters, protected by Israeli soldiers.

Outside Hebron is a group of villages collectively known as Masafer Yatta with a total population of perhaps 1,500 Palestinians.

On Wednesday, May 11, the same day as Shireen’s murder, Israeli bulldozers destroyed 19 structures in Masafer Yatta – 9 were family homes, the rest were storage buildings or shelters for sheep.

The buildings were located in the Palestinian territory, but within land confiscated by Israel for occasional use as a “military firing zone.” There are enormous unpopulated areas within Israel that would be suitable for firing zones, but Israel insists on using these Palestinian lands.

Following a 20-year court battle, the Israeli High Court of Justice recently declared the destruction of these Palestinian villages, and the expulsion of the residents, legal and acceptable (read more about Israeli firing zones here).

(Israel is struggling to ethnically cleanse Palestinian neighborhoods and villages, as well as Bedouin groups in parts of the Palestinian territories including East Jerusalem, and inside Israel. Designating regions as “firing zones” is one of many methods. Others include confiscating property to build or expand illegal settlements, withholding services, impeding movement, and more.)

He had been part of a group of minors who were allegedly throwing stones at Israeli police. The police opened fire, killing him with a bullet to the heart. Another boy was hit in the leg.

According to IMEMC, the International Middle East Media Center, “The soldiers also fired many live rounds, rubber-coated steel bullets, and gas bombs at many schoolchildren after several army jeeps invaded the area.”

On Saturday, the day of Shireen Abu Akleh’s funeral, Walid Al-Sharif, age 21, died – 3 weeks after Israeli soldiers had shot him in the head with a sponge-tipped bullet. Al-Sharif had been inside the Al-Aqsa mosque compound, defending it from frequent Israeli settler intrusion and police raids. Al-Sharif was one of 57 Palestinians injured that day.

Notably, on both occasions, the police were not in any immediate danger when they used deadly force.

(Israel frequently claims, in incidents as small as stone-throwing or as enormous as a full-blown “war,” that it is exercising its right to self-defense. However, Palestinians trying to exercise the same right – resisting their oppressor – are routinely punished, including collective punishment, which violates international law.)

Each of the over 10,300 Palestinians killed (more than 2,300 of them children) since 2000 is part of the story of Israeli colonial domination over the indigenous Palestinian population – a story that Americans helped to write.

Leading human rights organizations including Amnesty International, Human Rights Watch, and Israeli rights group B’Tselem have concluded that Israel’s policies against the Palestinians amount to a form of apartheid.

Perhaps Shireen Abu Akleh has had her 15 minutes of posthumous fame; perhaps she will be remembered only by her Palestinian audience and fellow journalists. But Israel’s oppression has lasted for 74 years, with no end in sight.

It behooves the international community – all people who believe in the cause of justice – to hold Israel accountable for its crimes against Palestinian individuals and families, and its ongoing crime against the people of Palestine.