Shireen IsawiRemains in Isolation after Attack on Palestinian Women Detainees 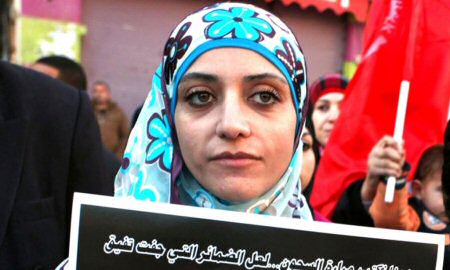 Palestinian detainee Shireen Issawi is currently being held in isolation in the Jalameh interrogation center since 22 June 2017, when the Damon prison administration stormed the women prisoners’ section and assaulted them, reported Palestinian lawyer Hanan al-Khatib. Issawi, of the Jerusalem village of al-Eeesawiyya, has been detained since 3 June, 2014, and is serving a four-year sentence on allegations of assisting Palestinian detainees and their families to provide money to their canteen (prison store) accounts inside Israeli prisons.

Isawiis the sister of former long-term hunger striker and re-imprisoned released prisoner Samer Isawias well as her brother Medhat Issawi, who was tried alongside Shireen on similar charges. She told al-Khatib that prison guards had beaten the prisoners with batons, including herself, and that she was bleeding with bruises all over her body after the incident. Tear gas was used on the prisoners in the area, and the prison director is the one who handcuffed the women with their hands behind their backs.

Some of her fellow women prisoners were also subject to sanctions by the prison administration, including administrative detainee Sabah Faraoun, Dalal Abu Hawa and Ataya Abu Aisha. Abu Hawa was isolated with Isawiin Jalameh, but has since been returned to Damon prison. She also said that after the attack, internal hearings were held for a number of prisoners, depriving them of family visits, denying them access to the canteen and subjecting them to financial penalties.

Isawitold al-Khatib that if the current situation continues, she will begin an open hunger strike. She noted that cameras are kept inside the room, violating the privacy of detainees, and that the room is tiny with the window covered in plastic. She is denied access to all electrical appliances in what she described as a dirty and filthy cell and is treated badly by racist jailers who scream and yell frequently.

She has been subject to solitary confinement five times so far in 2017. Palestinian women prisoners are mainly held in two prisons, Damon and HaSharon. Women prisoners in HaSharon have also reported poor conditions due to overcrowding, where some women have been forced to sleep on the floor without mattresses. HaSharon is where the 10 minor girls are imprisoned as well as prominent leaders Khalida Jarrar and Khitam Saafin, recently ordered to administrative detention without charge or trial.