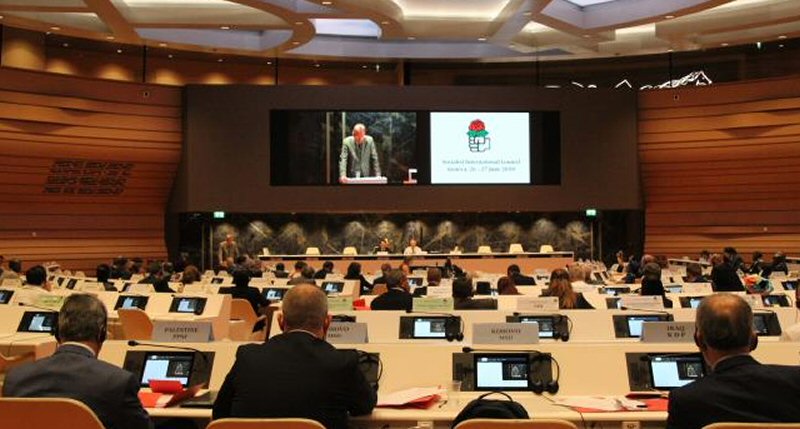 The Council of the Socialist International (SI) hasÂ calledÂ for Boycott, Divestment and Sanctions (BDS) for Palestinian rights at their meeting in the United Nations in Geneva on June 26-27. SI also called for a â€śtotal embargo on all forms of military trade and cooperation with Israel.â€ť

The SI has reaffirmed the Palestinian peopleâ€™s right to self-determination and called on governments and civil organizations to â€śactivate Boycott, divestment and sanctions (BDS) against the Israeli occupation.â€ť It called for the â€śtotal embargo on all forms of military trade and cooperation with Israel as long as it continues its policies of occupation and Apartheid against the people of Palestine.â€ť

SI strongly condemned Israelâ€™s â€śracist laws,â€ť and expressed its solidarity with Palestinian citizens of Israel, who â€ścontinu[e] to live under a system of institutionalized discrimination.â€ť

Given its sheer size and global reach, Socialist Internationalâ€™s call for sanctions against Israel is a game-changer in the global BDS movement.

It is the most significant call for sanctions against Israel to date since BDS was launched in 2005. BDS activists expect it to blow wind in the sails of the BDS movement and in particular, to mainstream the call for a military embargo on Israel after itsÂ massacreÂ of over 130 unarmed protesters in Gaza in May.

We deeply value Socialist Internationalâ€™s principled solidarity with the people of Palestine and salute them for taking concrete measures to hold Israel accountable for its decades-old regime of military occupation, colonialism and apartheid.

We look forward to the implementation of this momentous declaration in SI membersâ€™ home countries.

« Eurovision: Israeli Writers of Prize Winning Song under Threat of Plagiarism Suit Israel: We Will Not Allow Gaza To Be Rebuilt »