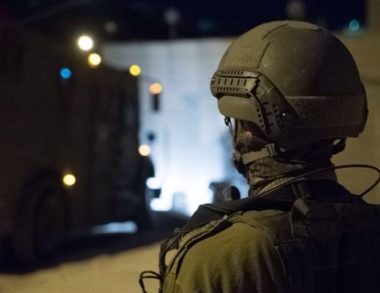 Israeli soldiers abducted, on Monday evening, a Palestinian child from the al-Walaja village, northwest of Bethlehem, in the occupied West Bank.

No protests were reported in the village, and the soldiers handcuffed and blindfolded the abducted Palestinian teen before moving him to the nearby Etzion military base, in the illegal Gush Etzion colony.

Also on Monday evening, the soldiers killed one Palestinian teen and injured another, near the entrance of the al-Jalama village, northeast of Jenin in northern West Bank.

The army claimed that Palestinians were riding a motor cycle and “hurled an explosive at the soldiers,” and did not report any injuries among them. The allegation was denied by the Palestinians who said the two were just returning home from work.

On Monday at dawn, the soldiers abducted seventeen Palestinians from their homes, in several parts of the occupied West Bank, the Palestinian Prisoners’ Society (PPS) has reported.