Soldiers Abduct A Palestinian In Hebron, Injure Many Near Nablus 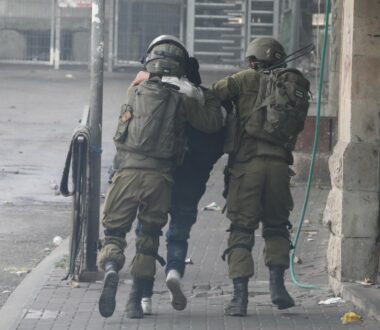 On Friday, Israeli soldiers abducted one Palestinian in Hebron, in the southern part of the occupied West Bank, and injured many in Beit Dajan, east of the northern West Bank city of Nablus.

Media sources said the soldiers attacked Palestinian protesters in the Bab az-Zawiya area and Shuhada Street in the center of Hebron city and fired many gas bombs at them and surrounding shops.

They added that the soldiers assaulted a young man and took them to their military posts in the area before moving him to an interrogation facility.

In Nablus, in the northern West Bank, the soldiers attacked nonviolent protesters against the Annexation Wall and colonies before shooting a young man with a rubber-coated steel bullet, causing many to suffer the effects of tear gas inhalation.