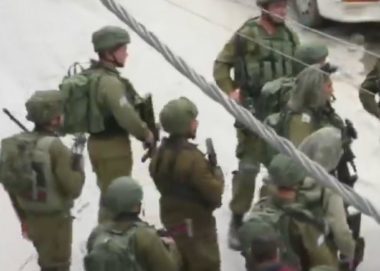 Media sources in Hebron said the soldiers stormed and ransacked the home of Mohammad Sa’adi Abu Dabbous, the coordinator of the Fateh Movement at Palestine Polytechnic University in Hebron.

They added that the soldiers searched the property, before abducting him, and invaded his father’s Currency Exchange shop, before ransacking it and confiscating cash and a computer.

In Bethlehem, south of occupied Jerusalem, the soldiers attacked many Palestinians, nonviolently marching in solidarity with the Gaza Strip amidst the ongoing Israeli military escalation, and fired a barrage of gas bombs and concussion grenades at them.