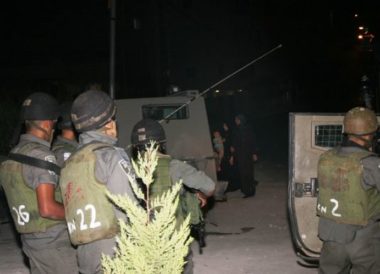 Israeli soldiers abducted, on Wednesday at dawn, at least eleven Palestinians from several parts of the occupied West Bank, after the army invaded and ransacked dozens of homes. One of the abducted Palestinians was taken prisoner at a military roadblock.

The Palestinian Prisoners’ Society (PPS) said the soldiers invaded and ransacked dozens of homes across the West Bank, and interrogated many Palestinians while inspecting their ID cards.

It added that the soldiers also installed roadblocks, before stopping and searching Palestinian vehicles, and interrogated many residents while inspecting their ID cards.

The PPS office in Hebron, in southern West Bank, said the soldiers abducted Mohammad Sa’adi Abu Dabbous, the coordinator of the Fateh Movement at Palestine Polytechnic University in Hebron, after invading his family’s home and searching it, in Tarqoumia town.

The soldiers also invaded his father’s currency exchange shop, and illegally confiscated cash and a computer.

In Ramallah, in central West Bank, the soldiers abducted Mousa Wael Hamed, 19, and Ali Kheirallah Hamed, from their homes in Silwad town, in addition to Omar Barghouti, 20, a student at Birzeit University.

In occupied Jerusalem, at least 50 soldiers invaded the home of Mohammad Abdul-Mon’em al-Ja’bari, 60, and searched the property for many hours, causing serious property damage, before abducting him.

The soldiers also invaded Kafr Aqab town, north of Jerusalem, and stormed the home of Obai ‘Aboudi, before violently searching the property.

The Palestinian is the head of Bisan Center for Research & Development; his wife said the soldiers stormed their home approximately at 3 at dawn and ransacked it before abducting her husband.

Another Palestinian, identified as Nassim Matahen, 18, from Jenin in northern West Bank, was abducted at the al-Jalama military roadblock, while on his way to visit with his detained brother, imprisoned by Israel at the Negev Detention Camp, in the Negev Desert.