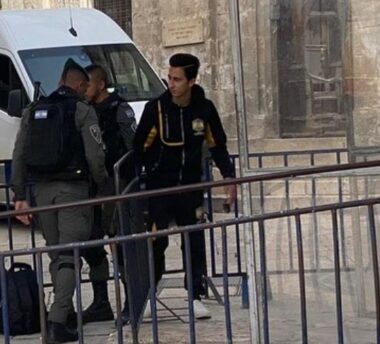 They added that the soldiers assaulted the Palestinians when thousands started leaving the Al-Aqsa Mosque after performing evening prayers.

It is worth mentioning that the soldiers and the police closed the road leading to the Sahera Gate and Bab al-Amoud.

The soldiers also installed a fence in Bab al-Amoud to prevent the Palestinians from gathering there and sitting in the stairs area, especially in the evening and early night.

The soldiers also invaded the Ein al-Lowza neighborhood in Silwan town, south of Al-Aqsa in Jerusalem, and fired rubber-coated steel bullets and concussion grenades to force the Palestinians to leave the streets.

In Tulkarem, in the northern West Bank, the soldiers invaded the Na’alwa neighborhood in the Shweika area north of the city and abducted former political prisoner Yousef Mhanna, 22, after surrounding his home.

The soldiers also closed the Shoufa military roadblock, southwest of Tulkarem, and prevented the Palestinians from crossing to allow dozens of illegal Israeli colonizers to gather and march in the area.

In Jenin, in the northern part of the occupied West Bank, the soldiers abducted Mohammad Shabrawi, from Nur Shams refugee camp, after shooting him near Arraba town, south of the city.