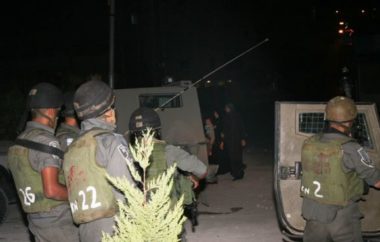 The Palestinian Prisoners’ Society (PPS) has reported that Israeli soldiers abducted, on Thursday at dawn, twelve Palestinians, including two siblings and one child, from their homes in several parts of the occupied West Bank.

The PPS office in Tulkarem, in northern West Bank, said the soldiers invaded and ransacked many homes in several parts of the governorate, and abducted four Palestinians, including two former political prisoners.

It identified them as Mo’tasem Taiseer Samara, 45, his brother Adnan, 35, in addition to Mustafa Omar Bodeir, 34, and Mohammad Monther az-Zar’ey, 21.

In Hebron, in southern West Bank, the soldiers abducted Mahmoud Jawad al-Wawi, a former political prisoner from Halhoul town, north of the city.

In Bethlehem, south of occupied Jerusalem, the soldiers abducted two Palestinians, identified as Anas Salah Masa’id, 17, and Omar Khaled Masa’id, 33, from their homes in ‘Aida refugee camp, north of the city.

In related news, the soldiers invaded the family home of a Palestinian detainee near the central West Bank city of Ramallah, before taking measurements of the property in preparation for detonating it.