Israeli Soldiers Take Measurement Of Home In Preparation For Detonating It 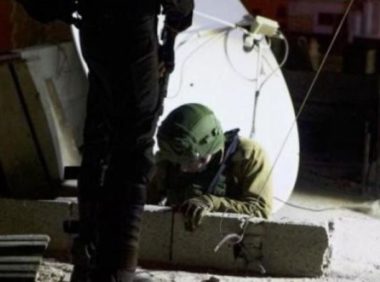 Dozens of Israeli soldiers  invaded, on Thursday at dawn, the family home of a Palestinian detainee near the central West Bank city of Ramallah, before taking measurements of the property in preparation for detonating it.

Media sources said the soldiers invaded and surrounded the entire area of the home of Qassam Barghouthi, in Kobar town, north of Ramallah, before storming the property and taking the measurements.

The Israeli army said this step is meant to prepare for detonating the property in the near future, after determining the needed measures.

The army alleges that Qassam is a member of the group that carried out the explosion in Ein Abwein, leading to the death of an Israeli settler.

Rina Shnerb, 17, from Lod, was killed, while her brother Dvir, 19, suffered serious wounds, and her father Eitan, 46, was mildly injured, when an improvised explosive went off near them while they were hiking near Ein Abwein spring northwest of Ramallah.