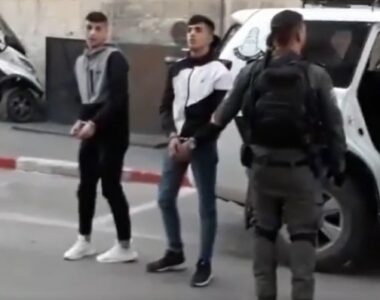 On Monday, Israeli soldiers abducted five Palestinians, detained one child before assaulting him, and a bulldozer driver in Jerusalem, Ramallah, and Nablus, in the occupied West Bank.

After assaulting him, the soldiers abducted Ahmad Nidal Rajabi from the Bab al-Amoud area in Jerusalem. The young man is from Silwan town in Jerusalem. In the Old City, the soldiers a child, Odai Ala Haddan, for interrogation, after briefly detaining him.

Furthermore, the army abducted two young men, who remained unidentified at the time of this report, after stopping them near the Sahera Gate, and invaded the at-Tour town east of the old city before chasing a young man who managed to escape.

In Ramallah, in the central West Bank, the soldiers invaded Ras Karkar village, northwest of the city, before assaulting and briefly detaining a child, Ragheb Samhan, 10, causing several injuries.

The soldiers also invaded Rojeeb village, east of the northern West Bank city of Nablus, and detained a bulldozer driver for a few hours.

In related news, Israeli colonizers attacked many Palestinian cars near an Israeli military roadblock at the northern entrance of the al-Biereh city in the central West Bank, causing damage.