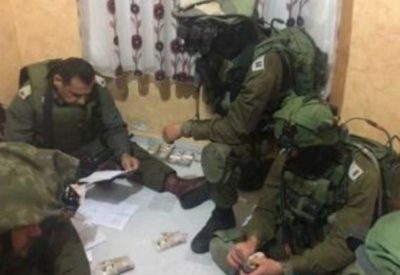 Israeli soldiers abducted, on Tuesday at dawn, five Palestinians, including a former political prisoner, in Ramallah governorate, in central West Bank. The army also invaded Ya’bad town, southwest of the northern West Bank city of Jenin, and illegally confiscated cash and gold from one home.

Media sources said the soldiers invaded and ransacked many homes in Ramallah city, Betunia town, west of Ramallah, and Deir Abu Mashal, north of the city.

They added that the soldiers abducted Tareq Abu Harb, Ghassan Mohammad Taha, and Othman Taiseer, from Deir Abu Mashal village.
The soldiers also abducted Khaled Zawahra from his home in Betunia, and a former political prisoner, identified as Issam Zoheir Taha, from his home in Ramallah city.

In related news, the soldiers invaded Ya’bad town, southwest of Jenin, before storming and ransacking the home of Mohammad Ali Kabaha.

During the search of his property, the soldiers illegally confiscated cash and gold, without any official documentation or warrants.
The man filed a complaint with the Palestinian District Coordination Office and said that this violent invasion into his property is the second in the last few days.