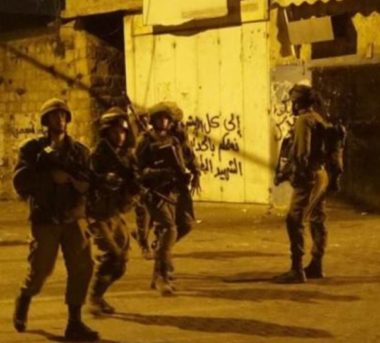 Israeli soldiers abducted, on Tuesday at dawn, eight Palestinians in Hebron, Nablus, and Jericho, in the occupied West Bank, in addition to invading homes in Shu’fat refugee camp, in Jerusalem, and attacking protesters.

The Palestinian Prisoners’ Society (PPS) in Hebron, in southern West Bank, said the soldiers invaded and searched homes in the city, and abducted Sameeh Gheith.

It added that the soldiers installed a roadblock in the ath-Thaheriyya town, southwest of Hebron, before stopping and searching cars, and abducted Ahmad Sa’id Zohour in addition to Fahed Ahmad Atawna, 40; both from Beit Kahil town, northwest of Hebron.

The soldiers also invaded many neighborhoods in Hebron city, and installed roadblocks on the entrances of Sa’ir and Halhoul towns, in addition to Jouret Bahlas area, north of Hebron, and al-Fahs area, south of the city, before stopping and searching dozens of cars, and interrogated many Palestinians while inspecting their ID cards.

In Nablus, in northern West Bank, the soldiers invaded homes in the eastern area of the city, in addition to Balata town and Balata refugee camp, before abducting Ward Jihad Abu Rezeq and Ramzi Dweikat.

In Jericho, the soldiers abducted Mo’in Damo, from his home in Aqbata Jaber refugee camp.

The soldiers also fired gas bombs and concussion grenades at Palestinians, protesting the invasion into the refugee camp.

Also at dawn, the soldiers abducted five Palestinians, including a former political prisoner, in Ramallah governorate, in central West Bank, and illegally confiscated cash and gold from one home, in Ya’bad town, southwest of the northern West Bank city of Jenin.