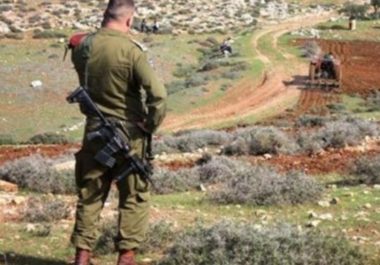 Israeli soldiers issued, Tuesday, orders for the illegal annexation of Palestinian lands in the al-Jab’a village, southwest of Bethlehem, in the occupied West Bank.

The al-Jab’a Village Council said the soldiers posted the orders on lands owned by Palestinians from Abu Loha and Hmeidan families.

It added that the lands Israel is confiscating are four Dunams (0.92 Acres) from the two families, and that the army intends to convert them into a parking lot close to a nearby permanent military roadblock.

Nearby a month ago, the army issued orders for the confiscation of more than 2000 Dunams (494.2 Acres) from the villagers in al-Jab’a, for what the army called “military purposes.”

On Tuesday at dawn, the abducted eight Palestinians in Hebron, Nablus, and Jericho, in the occupied West Bank, in addition to invading homes in Shu’fat refugee camp, in Jerusalem, and attacking protesters.

Also at dawn, the soldiers abducted five Palestinians, including a former political prisoner, in Ramallah governorate, in central West Bank, and illegally confiscated cash and gold from one home, in Ya’bad town, southwest of the northern West Bank city of Jenin.