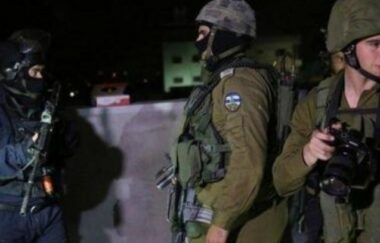 Media sources said the soldiers invaded the Nubani Farms area, north of Ramallah, and abducted a former political prisoner, identified as Ibrahim Msafer, after invading his home and ransacking it.

They added that the soldiers also invaded Deir Ghassana town, northwest of Ramallah, and withdrew later.

Furthermore, the soldiers abducted a former political prisoner, identified as Midhat al-Isawi, after invading his home and ransacking it, in the al-Isawiya town, in the occupied capital, Jerusalem.

Midhat was imprisoned by Israel for eight years and was only released four months ago.

Midhat is also the brother of Shirin Isawi, a former political prisoner and a lawyer who was also frequently abducted and imprisoned by Israel, and Samer al-Isawi,  who in the year 2013 held a hunger strike for 265 days, and nearly died, demanding his freedom.