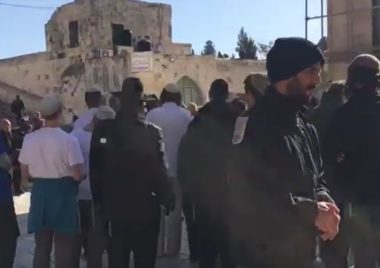 Media sources said the four women were attacked by the soldiers, before they were abducted and taken to a nearby police center.

They added that the army claimed the women were “obstructing the visit” of a group of settlers and soldiers, who invaded the courtyards of the al-Aqsa Mosque.

Soldiers and police officers constantly accompany dozens of fanatic illegal colonists in provocative tours into the Al-Aqsa Mosque complex, after the police forcibly remove the Muslim worshipers and repeatedly abducts many of them.

In addition, the soldiers abducted three Palestinians from Silwan town, and the Old City, of occupied East Jerusalem, in the West Bank.

On Sunday, the soldiers abducted four Palestinians, including a former political prisoner, from the al-‘Isawiya town, in Jerusalem.