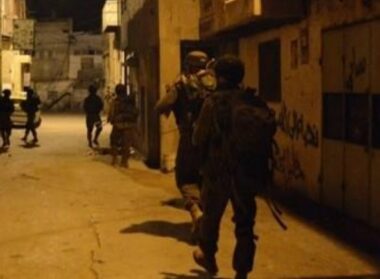 Israeli soldiers abducted, on Monday at dawn, at least nine Palestinians from their homes in several parts of the occupied West Bank.

They added that the soldiers also invaded Silwad town, northeast of Ramallah, before storming an apartment building, and abducted two Palestinians, one of them has been identified as Yousef Samed Hammad.

It is worth mentioning that undercover Israeli soldiers infiltrated into the at-Tireh neighborhood in Ramallah, but were unable to ambush and abduct any Palestinians.

In Bethlehem, south of occupied Jerusalem in the West Bank, the soldiers invaded Janata village, east of the city, and abducted Suleiman Faisal al-‘Arouj, 26, from his home.

In Tulkarem, in northern West Bank, the soldiers abducted a former political prisoner, identified as Hussein Hilmi Abu Shanab, from his home in the Eastern Neighborhood.

The soldiers also invaded many neighborhoods in Qalqilia city, in northern West Bank.

In the occupied capital, Jerusalem, the soldiers invaded Beit Anan village, northwest of the city, and abducted Mohammad Rabea’ from his home, in addition to summoning Ahmad Bakr Rabea for interrogation after breaking into his home and searching it.

On Sunday night after midnight, the soldiers invaded the Abu Tayeh neighborhood in Silwan, in Jerusalem, and fired many concussion grenades at random, before withdrawing without conducting any arrests.