Soldiers Abduct One Child, Injure Many Palestinians, In Beit Ummar 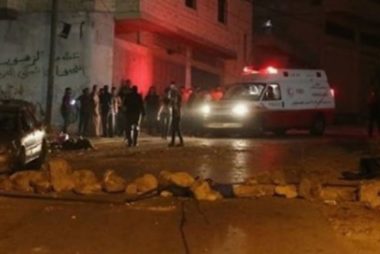 Israeli soldiers invaded, on Monday evening, Beit Ummar town, north of the southern West Bank city of Hebron, abducted one child and injured many other Palestinians in the ath-Thaher area.

Local media activist Mohammad Awad, said the soldiers invaded the ath-Thaher area of the town, near the illegal Karmie Tzur colony which was built on Palestinian lands south of the town, and fired a barrage of gas bombs and rubber-coated steel bullets at protesters and homes.

Awad added that many Palestinians suffered the effects of teargas inhalation and received the needed treatment.

The soldiers also broke into a blacksmith workshop, owned by Jihad Ali Sabarna, and abducted his son, Mohammad, 15.