Soldiers Abduct One Palestinian, Injure Many Schoolgirls, In Jerusalem 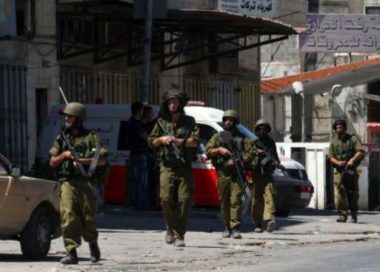 Israeli soldiers abducted, on Thursday afternoon, one Palestinian and injured many schoolgirls in Anata Palestinian town, northeast of occupied Jerusalem.

Najwa Refa’ey, the principal of Anata H School for Girls, said many army jeeps invaded the street in front of the school, and attacked many young men who protested the invasion and hurled stones at the soldiers.

She added that the soldiers fired a barrage of gas bombs and concussion grenades into the area, including the school campus, causing dozens of students to suffer the effects of teargas inhalation.

The schoolgirls could not leave their educational facility after the school day was over, and had to wait for some time until the soldiers left.

Furthermore, the soldiers chased a young man near the school, and abducted him; he remained unidentified at the time of this report.

It is worth mentioning that the soldiers invaded the same area earlier on Thursday at dawn, and fired many gas bombs, concussion grenades and rubber-coated steel bullets at Palestinian protesters.

On Thursday at dawn, the soldiers abducted fourteen Palestinians from their homes in several parts of the occupied West Bank.