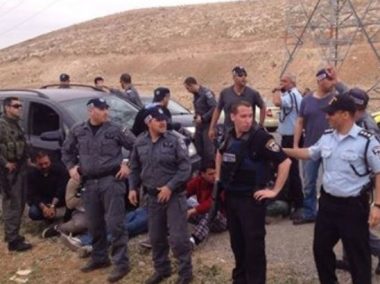 Israeli soldiers abducted, on Saturday at night, a driver who works for the Education Ministry in Qabatia town, south of the northern West Bank city of Jenin, after attacking him, and breaking one of his ribs, in al-Khan al-Ahmar near occupied Jerusalem.

Zakarna added that the soldiers stopped Kamil at the entrance of al-Khan al-Ahmar, after he tried to remove one of the police barriers, and frequently assaulted him, in addition to using their tasers on him.

Kamil’s brother said the soldiers took him to Ofer detention center, despite his need to urgent medical attention, especially since the soldiers broke one of his ribs.

It is worth mentioning that the soldiers installed barriers, in addition to placing sand hills and rocks, blocking the entry of solidarity activist into al-Khan al-Ahmar, which is still facing the threat of demolition and displacement.