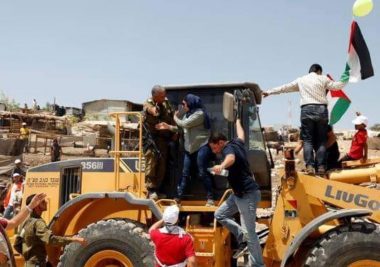 Dozens of Israeli soldiers completely sealed and isolated, Wednesday, al-Khan al-Ahmar Palestinian Bedouin community, which is slated for demolition and displacement, and placed concrete blocks at its entrances.

The head of the Colonization and Wall Resistance Commission, Walid Assaf, said the soldiers prevented dozens of Palestinians and international peace activists, from entering the area, to continue the protests against the demolitions and displacement.

He added that the soldiers isolated al-Khan al-Ahmar, and prevented many foreign dignitaries and consuls from reaching the area, while a few others managed to enter.

Assaf also stated that many physicians tried to enter al-Khan al-Ahmar, but were denied entry.

He said that the Palestinian Medical Relief Society brought a mobile clinic, to provide services for the villages, but the army prevented its entry.

The Medical Relief has been providing basic services to the villages of al-Khan al-Ahmar, especially the children and people who suffer from chronic conditions, such as diabetes, heart diseases and high blood pressure.

In addition, the soldiers surrounded the local school of al-Khan al-Ahmar, as it is also under the threat of demolition, just as the rest of the Bedouin community.

The school was funded by the European Union, while the soldiers also held several peace activists in it.

The villagers of Khan al-Ahmar hold deeds to their ancestral land where they reside, but the Israeli government refuses to recognize them because they were issued by the Palestinian Authority, and the land where the Bedouins live is part of a planned expansion of illegal colonies.

The entire village is set to be razed to the ground by military forces under the ‘E1 Jerusalem Plan’ meant to encircle the eastern part of Jerusalem with Israeli colonial settlements in order to encircle Jerusalem and claim it for Israel, denying the Palestinian people’s historical and ongoing claim to the city.

Last Thursday, the Israeli High Court ruled to temporarily halt the demolition, for six days, following an international media campaign and pressure from foreign diplomats, as well as non-violent passive resistance by Palestinian residents of Khan al-Ahmar, and peace activists.