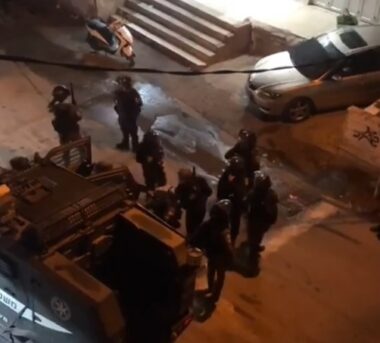 Israeli soldiers abducted, on Wednesday at dawn, six Palestinians, including two children in the at-Tour and the al-‘Isawiya towns, in occupied Jerusalem, the Wadi Hilweh Information Center In Silwan (Silwanic) has reported.

It added that the abducted Palestinians have been identified as Abed al-Hadra, Talal as-Sayyad, Mohammad Mousa as-Sayyad, and Mohammad Abu al-Hawa.

Silwanic also said that the soldiers also invaded the al-Isawiya town, searched a few homes, and abducted two children, one of them has been identified as As’ad Dari.

It is worth mentioning that the soldiers and police officers isolated al-Isawiya, after closing its main roads amidst extensive military deployment.

On Tuesday evening,  the soldiers abducted five Palestinians, including two who were kidnapped by undercover soldiers, and fired many gas bombs and concussion grenades at Palestinian protesters in occupied Jerusalem.