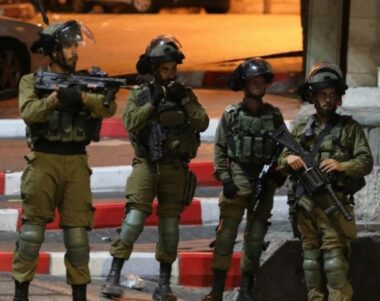 Israeli soldiers abducted, on Friday at night, three Palestinian construction workers in an under-construction school in the Tbeil area in Kafr Malek town, east of the central West Bank city of Ramallah, and confiscated their car.

Local sources said the soldiers invaded the Ein Samia area in Kafr Malek, before storming the construction site where the workers were spending the night, and abducted them, in addition to confiscating their car.

They added that the soldiers alleged the school is being built in Area C of the occupied West Bank and did not receive a permit from the so-called Civil Administration Office, the administrative branch of Israel’s illegal occupation.

It is worth mentioning that, four days ago, the soldiers invaded the same school construction site, and abducted two workers in addition to confiscating a truck and various tools.

Two months ago, the soldiers invaded the same area and forced members of the local Ka’abna family out of the area.

A year ago, illegal Israeli colonizers installed an outpost on stolen Palestinian lands in the Ein Samiya area, leading to ongoing protests that are constantly attacked by the soldiers, causing dozens of injuries, including many who were shot with live fire.