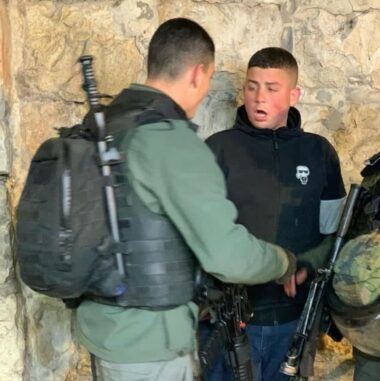 Israeli soldiers abducted, on Wednesday evening, four Palestinians, including a teenage boy, and confiscated a bulldozer, in Jerusalem and Jenin, in the occupied West Bank.

The army abducted a teenage boy, Omar Hazina, from the Old City after many soldiers invaded the area and initiated searches, especially in at-Tour and Sultan Suleiman Street.

The soldiers stopped and searched many Palestinians during the invasion and interrogated them while examining their ID cards.

Also, the soldiers abducted Ahmad Noah Boujairmi and his nephew Mohammad Abdul-Rahman Boujairmi from the Jenin refugee camp while they were crossing a military roadblock on the Jenin-Nablus Road in the northern part of the West Bank.

In addition, the soldiers abducted Khaled Jamal Abu ar-Rob and confiscated his bulldozer while he was rehabilitating and working on his land near the illegal Annexation Wall in Jalboun village, east of Jenin.