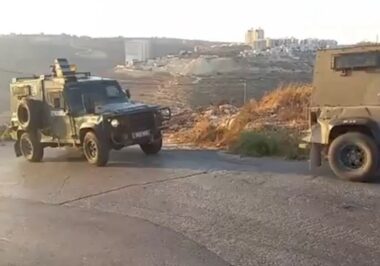 Israeli soldiers abducted, on Monday at dawn, three Palestinians, including a former political prisoner, in Ramallah and Bethlehem, in the occupied West Bank.

The sources added that the invasion led to protests before the soldiers fired gas bombs, concussion grenades, and rubber-coated steel bullets; there have been no reports of injuries.

In addition, the soldiers invaded Ein Qiniya village, northwest of Ramallah, and searched a few homes.

In Bethlehem, south of occupied Jerusalem in the West Bank, the soldiers abducted Qussai Raed al-‘Arouj, from his home in the al-‘Arouj village, and Ibrahim Mohammad Jubran, 29, from his home in Hindaza Mountain, east of the city.