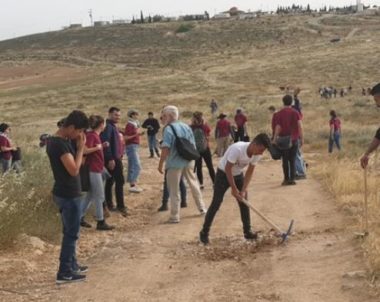 Israeli soldiers abducted, on Friday morning, at least twenty peace activists, while trying to help Palestinian farmers to enter their own lands, which Israel intends to illegally confiscate.

They added that the soldiers abducted a Palestinian photojournalist, identified as Abdul-Hafith al-Hashlamoun, in addition to twenty peace activists; most of them are Israeli.

The Israeli military attack took place after dozens of locals and solidarity activists arrived in um al-‘Arayes area, to help the Palestinian enter their own lands which Israeli is planning to illegally annex for its colonialist activities.