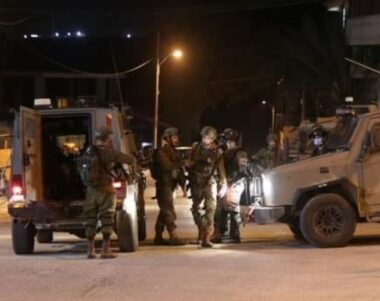 Israeli soldiers abducted, on Friday at dawn, two Palestinian siblings from their home in Qabatia town, south of the northern West Bank city of Jenin.

They added that the soldiers abducted Nimir Talal Zakarna and his brother Mohammad, before taking them to a nearby military base.

The invasion into the town led to protests before the soldiers fired a few live rounds, gas bombs, and rubber-coated steel bullets.

On Thursday evening, the soldiers abducted a young man after stopping him at a military roadblock near Jenin.