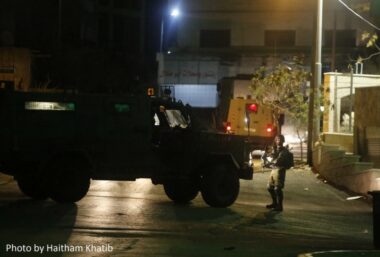 Israeli soldiers abducted, on Tuesday at dawn, two young men from Nablus and Ramallah, in the northern and central parts of the occupied West Bank.

Media sources in Nablus said the soldiers invaded several neighborhoods in the city, before storming and ransacking homes.

They added that the soldiers abducted a young man, identified as Omar Shalhoub from his home in Asira Street, and summoned Soheib al-Kharraz for interrogation.

Furthermore, the soldiers invaded the al-Walaja village, northwest of Bethlehem south of occupied Jerusalem in the West Bank, and handed the Palestinians four demolition orders targeting their homes.

In related news, the soldiers demolished a shop, and injured at least sixteen Palestinians in the al-Bustan neighborhood in Silwan town, in the occupied Palestinian capital, Jerusalem. The building is among seventeen structures and homes threatened with demolition in Silwan.