Soldiers Assault A Child, And Abduct Him, In Al-‘Isawiya 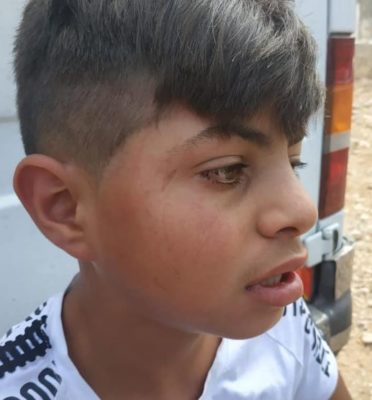 Israeli soldiers assaulted, Sunday, a Palestinian child in the town of al-‘Isawiya, in occupied East Jerusalem, and abducted him.

Local sources said the soldiers assaulted the child, identified as Nabil Mohammad Abu al-Hummus, 12, while he was walking to a shop near his home.

They added that the soldiers then abducted the child and took him to a detention facility in Jerusalem, after alleging that he hurled stones at their jeep.

The soldiers also attacked the child’s father while he was trying to talk to them and was telling them Nabil is just a child who was going to the shop.

On Sunday at dawn, the soldiers abducted four Palestinians, including one woman, from their homes in several parts of the West Bank, the Palestinian Prisoners’ Society (PPS) has reported.