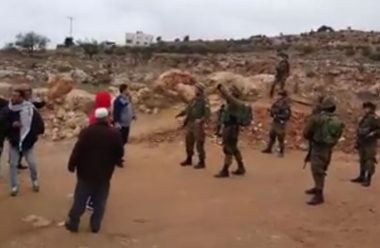 Dozens of soldiers were deployed in the area, attacked the protesters, including international activists, and fired gas bombs at them.

The protesters carried signs and chanted slogans demanding the army to reopen the road, which was blockaded by the military seventeen years ago, and called for ending Israel’s illegal colonialist occupation.

The villagers in Qalqas are forced to take alternate, unpaved roads, to enter and leave their village due to Israel’s illegal closure and blockade. Earlier Friday, the soldiers broke into and searched many homes and neighborhoods in Silwan town, south of Al-Aqsa Mosque, in occupied East Jerusalem, and abducted a child, identified as Husam Zeitoun, 13.