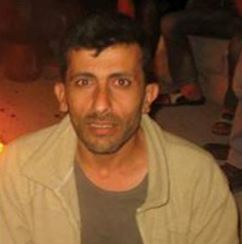 The Palestinian Prisoners Society (PPS) has reported, Tuesday, that one of its lawyer managed to visit hunger striking detainee Sami Janazra, who started his hunger strike 62 days ago, and said the detainee was beaten by the soldiers after refusing to be cuffed and shackled to his bed in Soroka Israeli hospital.

Janazra, 41, told the lawyer that several soldiers attacked him, last Sunday, when he refused to have his hands cuffed and his legs shackled to his hospital bed, and that on Tuesday the detainee refused to drink any water to protest his abuse.

The PPS lawyer said Janazra has lost 25 kilograms of his weight, as it dropped from 72 kilos before his strike, down to 47.

Janazra also complained to the lawyer about the bad treatment he faces by the doctors and nurses at the hospital.

It is worth mentioning that, several days ago, a number of Israeli security officers met with Janazra to listen to his demands, but never made any promises or proposals.

Janazra went on hunger strike staring on March 3, while being held in the Negev detention camp, in the Negev Desert, and on March 13, after he received another Administrative Detention order extending his imprisonment for four additional months, for the second time since his abduction on November 15, 2015.

He is from the al-Fawwar refugee camp, in the southern West Bank district of Hebron, and remained under arbitrary Administrative Detention orders, without charges or trial, since then,

He suffers pain in his kidneys, abdomen and various parts of his body. Janazra, a father of three children, (Firas, Mahmoud Darweesh and Mariya), was previously imprisoned five times.