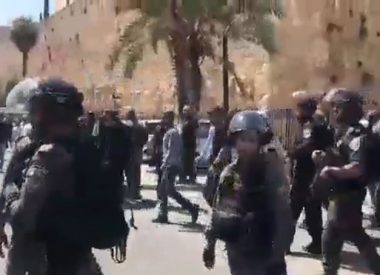 Israeli soldiers attacked, Friday, dozens of Palestinians nonviolent protesting in Bab ar-Rahma historic Islamic graveyard, where the Jerusalem City Council dug many graves, by the Al-Aqsa Mosque, and denouncing the illegal U.S. decision to move its embassy to the occupied city.

The protesters marched against the ongoing desecration of the historic graveyard, which started three months ago, as part of an Israeli project to establish “The Museum of Tolerance.”

The soldiers fired a barrage of gas bombs and concussion grenades at the protesters, abducted two and assaulted many others with clubs and batons.

In addition, the soldiers attacked many journalists, and broke cameras and equipment for Palestine TV, before forcing them out of the area.

It is worth mentioning that hundreds of soldiers and police officers have been deployed in the area.