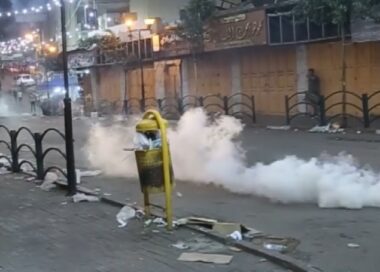 Israeli soldiers attacked, on Sunday evening, many Palestinian protesters in Hebron city, in the southern part of the occupied West Bank.

Local sources said the soldiers, stationed at the permanent roadblocks leading to Shuhada Street in the center of the city, refused to allow the Palestinians through and forced them away.

They added that the soldiers invaded the Bab az-Zawiya area, near the military roadblock, and chased the Palestinians away, leading to protests.

The soldiers fired gas bombs and concussion grenades at the residents in the Bab az-Zawiya area, also known as a major commercial center in the city; there have been no immediate reports of injuries.

In related news, the soldiers closed the iron gate at the main western entrance of Azzoun town, east of the northern West Bank city of Qalqilia, and prevented the Palestinians from entering or leaving the area.