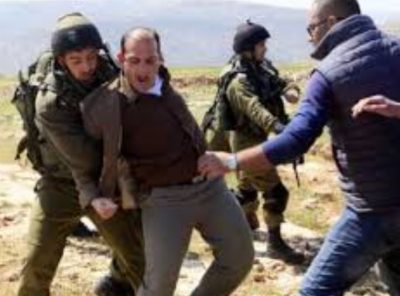 Israeli soldiers resorted to the excessive use of force, Sunday, against Palestinians planning trees on their lands in Deir Ballout town, west of Salfit, in northeastern West Bank, causing several injuries, during a nonviolent activity aimed at Planting trees on lands threatened by Israel’s illegal construction of expansion of its colonies and the Annexation Wall.

One of the wounded is Fawwaz Nasser, of the Popular Work department of the Palestinian Committee against the Wall and Colonies; he was shot with a rubber-coated bullet in his arm.

Many Palestinians suffered the severe effects of teargas inhalation and received the needed treatment.

The soldiers assaulted the Palestinians for holding this nonviolent activist and plant olive trees, on lands near the illegal Annexation Wall, and are targeted with illegal annexation by Israel. 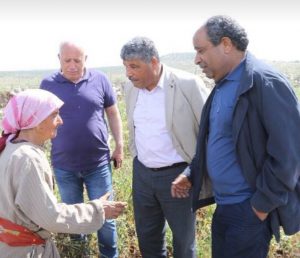 Among the participants in the nonviolent activity was Salfit Governor Ibrahim al-Balawi, and the head of the National Committee against the Wall and Colonies, Minister Walid Assaf, Fateh Secretary in Salfit Abdul-Sattar Awwad, in addition to many officials, representatives of nongovernmental and social organizations.

The participants stressed on the importance of planting and protecting the lands, especially those threatened by Israel’s illegal Wall and colonies, and are under constant attacks by the colonizers, in addition to the lands that became isolated behind the illegal Annexation Wall.